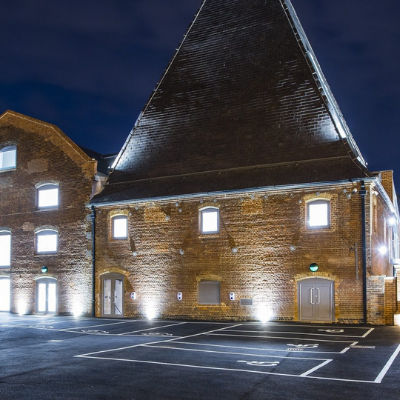 A plush office complex on the site of a former nightclub in Ipswich is now three quarters full, pointing to a continuing business demand for innovative accommodation following Covid-19.

Miller Insurance recently moved into The Maltings and earlier this year Network Rail set up its first regional office across two floors of the renovated building in Princes Street, which was completed in 2019 following a £600,000 loan from New Anglia Local Enterprise Partnership’s Growing Places Fund.

That leaves two suites of 3,000sq ft available for let at the £3.5m complex, which was developed by Pertwee Estates and is within the LEP’s Space to Innovate Enterprise Zone.

Insurance underwriter Lonham Group was unveiled as the first tenant in early 2020 after setting up its headquarters there, and Ipswich company Planning Direct moved in later in the year.

Despite the exodus of staff from many offices to work at home during the pandemic, the unusual, modern style of The Maltings’ accommodation and its proximity to the train station, has proved attractive to businesses. Network Rail has taken out a 10-year lease and occupies 8,911sq ft on the first and second floors, directly off a central glass atrium.

Vanessa Penn of Penn Commercial, the sole agent for the building, said: “Network Rail wanted a flagship office for their regional training hub which was close to the station and could service Stratford and places in between. Miller Insurance were already in Ipswich and had to leave the building they were in and wanted to be close to the station because they have offices in London.

“Some businesses want satellite offices or a smaller version of what they have and that is what we will be finding going forward — a demand for high-quality, but smaller office space.”

For more than 10 years the Grade II listed building stood derelict, and it was a loan from the LEP’s Growing Places that was the catalyst for its transformation into 24,000sq ft of hi-tech office space. Its addition to the Princes Street district has contributed to its growing reputation as the town’s professional quarter.

Vanessa added: “The LEP was really helpful in getting the building to where it is now and it helps to create a professional district, with Birketts’ headquarters already there and Ipswich Borough Council potentially developing a site there.”

C-J Green, Chair of the LEP, said she was delighted the building was almost at capacity and said it was a confidence boost for the local economy.

“Ipswich is one of the Priority Places identified in the Economic Strategy for Norfolk and Suffolk and the level of interest in the office space developed at The Maltings cements this as a place for professional companies to do business,” she said.

“The Growing Places Fund is all about supporting infrastructure that will unlock wider economic growth and create jobs, and the restoration of The Maltings is an example of this in action.”

Get in touch today

Sharpen your skills, enhance your network and give your business the tools to grow at our free workshops

Stay in the loop with our newsletter

Sign up to receive updates from the Growth Hub on funding opportunities, business news, upcoming events and more